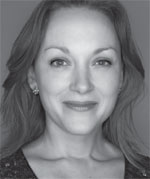 Kirsty Hopkins read Music at Manchester University and Trinity College of Music where she won the Elizabeth Schumann Lieder Prize. She has appeared as a soloist on the concert platform for Harry Christophers, Sir John Eliot Gardiner, English Chamber Orchestra, Orchestra of the Age of Enlightenment, Aurora Orchestra and Hamburg Symphony Orchestra. She also sings with The Sixteen and last year returned for the Eric Whitacre Late Night Prom in which she performed a short solo in his Cloudburst.