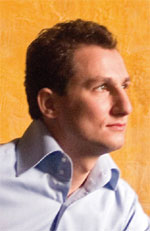 Parisian violist Antoine Tamestit is constantly in demand as a soloist, chamber musician, and recitalist. Following studies in Paris, he studied with Jesse Levine at Yale University, and with Tabea Zimmermann. He has received several coveted prizes including the William Primose Competition, BBC Radio 3’s New Generation Artists Scheme, the Borletti-Buitoni Trust Award, and the Credit Suisse Young Artist Award. His wide ranging repertoire encompasses Baroque music to contemporary works, the latter including George Benjamin’s Viola, Viola (recorded with Tabea Zimmermann), Concerto for two violas by Bruno Mantovani (written for him and Zimmermann), and a concerto written for him by Austrian composer Olga Neuwirth. As a soloist, Tamestit has worked with the Vienna Philharmonic, London Symphony Orchestra, Leipzig Gewandhaus Orchestra, Bavarian Radio Symphony Orchestra, and Orchestre de Paris, among others. His chamber music work has taken him to the Verbier Festival (2012), appearing with Leonidas Kavakos and Gautier Capuçon, and to the Salzburg and Edinburg Festivals in a string trio with Frank-Peter Zimmermann and Christian Poltera. He has also performed with Louis Langrée, Christian Tetzlaff, Gidon Kremer, and Emmanuel Pahud, and regularly appears as a chamber musician and recitalist in major halls across the world. In 2006 he gave the first ever viola recital at New York’s Lincoln Center. He has also recorded widely for Naïve/Ambroisie, Virgin Classics, Pentatone, and Harmonia Mundi.