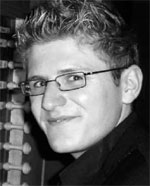 see also Tristan Russcher (conductor)
see also Tristan Russcher (piano)
Born in Perth, Western Australia, Tristan Russcher has been playing the piano since he was three years old. After receiving his Associate Diploma in Music (A.Mus.A) on the piano at the age of 14, at the time the youngest ever in Western Australia, he was awarded a full music scholarship to study the organ with Simon Wright at Ampleforth College, York, where he gained his A-Levels. In October 1999 he was offered an unconditional entry to Worcester College, Oxford to take up the position of Organ Scholar, where he studied the organ with David Goode and was tutored by Dr Robert Saxton.

He graduated with honours in Music in 2003. In February 2003 Tristan was awarded the joint Organ Scholarship at Christ Church and St Patrick’s Cathedrals, Dublin for the period 2003-2005 and, in 2007, was appointed Assistant Director of Music at Christ Church Cathedral Dublin. In May 2005 he was the runner-up in the Pipeworks International Organ Competition and past recital venues include the National Concert Hall Dublin, St Mary’s Pro-Cathedral Dublin, St Patrick’s Cathedral Dublin, St Michael’s Church Dun Laoghaire, Trinity College Dublin, Oosterkerk Amsterdam and Washington National Cathedral.

Tristan is a Fellow of the Royal College of Organists and has recorded with numerous CD labels including OxRecs, Priory and Signum. In 2008 Tristan presented the complete organ works of Olivier Messiaen in a week-long joint recital series with David Leigh, supported by Pipeworks. He has been broadcast on RTE Lyric FM and BBC Radio 3 and Radio 4 and has an active organ and chamber music recital program in Ireland and abroad.