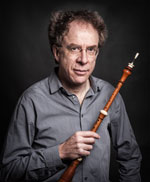 Soon after graduating from the Royal Conservatory of the Hague in 1987, where he studied with Bruce Haynes and Ku Ebbinge, Alfredo Bernardini joined some of the most prestigious Baroque ensembles, such as Hespèrion XX, Le Concert des Nations, La Petite Bande, Amsterdam Baroque Orchestra, Freiburger Barockorchester, English Concert, Bach Collegium Japan and Balthasar Neumann Ensemble, and with them toured all over the world and took part in over 100 recordings. In 1989, with the brothers Paolo and Alberto Grazzi, he founded Ensemble Zefiro, whose recordings have won important prizes such as the Cannes Classical Award and the Diapason d’Or de l’Année in 2009.

As a director, Bernardini has worked with orchestras in Italy, France, Germany, Spain, Portugal, Belgium, Holland, Ireland, Denmark, Norway, Poland, UK, Sweden, Canada, Cuba, Australia and Israel and with the European Union Baroque Orchestra. In January 2013 he was counsellor and director of the first Baroque orchestra project of El Sistema de Música in Venezuela. His research on the history of woodwind instruments has resulted in several important articles in international journals. From 1992 to 2014 he taught historical oboe at the Conservatory of Amsterdam; he also taught from 2002 to 2009 at the Escola Superior de Música de Catalunya, Barcelona. Since 2014 Bernardini has been a professor at the Mozarteum University of Salzburg.