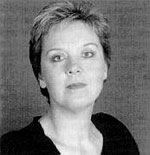 Susan Bickley has a busy concert schedule with orchestras such as the London Symphony, The Philharmonia, London Philharmonic, Hallé, BBC Symphony, Orchestra of the Age of Enlightenment, London Classical Players, London Sinfonietta, Sinfonia 21 (formerly the Docklands Sinfonietta), St. James's Baroque Players, Premiere Ensemble, Les Arts Florissants and the Ensemble Intercontemporain and has given recitals with the Allegri and Brodsky Quartets, The Songmakers' Almanac and Fretwork.