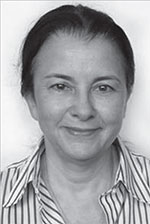 Marie-Bernadette Dufourcet Hakim is Professor Doctor at the University of Bordeaux. She is also Visiting Professor at the University Autonoma of Madrid (Spain) where she directs a seminar on Baroque keyboard music in France and Spain. She studied organ music with Susan Landale, Marie-Claire Alain, Rolande Falcinelli and Jean Langlais. At the Conservatoire National Supérieur de Musique de Paris, she won first prizes in organ, improvisation, harmony, counterpoint and second prizes in fugue, instrumentation and orchestration.She is a licentiate performer from the Trinity College of Music in London; she won First Prizes at the International organ and improvisation competitions in Rennes (France), St. Albans (UK), Beauvais (France), as well as the second Grand Prix d’interprétation of Chartres (France). She is Emeritus organist of the Grand-Orgue Cavaillé-Coll of the church Notre-Dame-des-Champs in Paris.

As a musicologist, she is interested in French and Spanish keyboard music from the 16th to 17th centuries and is involved in several research projects and international musicology conrgresses. In 2004, 2009 and 2010, she organized in Bordeaux three International Congresses on the famous builder Dom Bedos. With Combre Editions she has published an 18th-century French Organbook composed by Louis Archimbault from which she recorded several pieces (Schott-Mainz, ORGAN, ORG 7011 2). Her repertoire includes symphonic music from the 19th to 20th century as well as from the Baroque period. She shares her life with the composer Naji Hakim, successor of Olivier Messiaen at the great organ of the church of La Trinité in Paris. During the AGO 2000 National Convention held in Seattle, she created Naji Hakim’s Seattle Concerto at Benaroya Hall with the Seattle Symphony directed by Gerard Schwarz (CD IFO 00 322). For her academic accomplishments, she received the medal of ‘Chevalier des Palmes Académiques’ in 2010 and the medal of ‘Chevalier de l’Ordre National du Mérite’ in 2012.