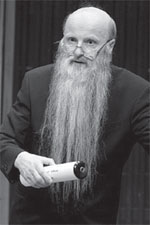 In concert halls throughout the world, Rex Lawson’s name is synonymous with the pianola; not the brash, mechanical variety found in cowboy films and backstreet bars, but rather the original pianola, a sophisticated instrument which responds well to serious study, and which fits in front of the keyboard of any normal concert grand, playing it by means of a set of felt-covered wooden fingers.

Rex was born in Bromley, Kent, in 1948, to parents who met through playing two-pianos together. He studied music at Dulwich College, as a junior exhibitioner at the Royal College of Music, and at Nottingham University. Fascinated by his first pianola in 1971, he abandoned plans for a more traditional musical career, and initially concentrated on concerts with reproducing pianos, bringing back Percy Grainger to play the Grieg Piano Concerto at the Queen Elizabeth Hall in 1972, over ten years after the pianist’s death.

At the same time, inspired by William Candy, once the music roll critic of the Gramophone and Musical Times, Rex began studying the pianola, the foot-operated player-piano, making his major international debut in 1981 in Paris, performing in the world première of Stravinsky’s Les Noces (1919 trial version), under the direction of Pierre Boulez.

Highlights of a rewarding international career have included an appearance as soloist at Carnegie Hall in George Antheil’s Ballet Mécanique, the renewed resuscitation of Percy Grainger for the Last Night of the Proms in 1988, and the first concert performances of nearly all of Stravinsky’s pianola works, including the Rite of Spring at the Théâtre des Champs-Élysées in Paris, and the first performance with live pianola, of the newly-completed 1919 version of Les Noces, with James Wood and the RIAS Kammerchor, at the Berlin Festival in 2013. In recent years Rex has had two pianola concertos written specially for him, by the British composer, Paul Usher, and the Venezuelan, Julio d’Escrivan, and in 2007 he gave the first pianola performance of Rachmaninoff’s 3rd Piano Concerto, with the Brussels Philharmonic Orchestra under Yoel Levi.

Rex Lawson pursues a parallel career as a musicologist and lecturer, participating in many academic symposiums and university courses. Rex has recorded extensively, with many CDs still in current catalogues.