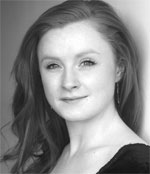 Mezzo Soprano Nancy Cole was brought up in Lancaster and educated at the Lancaster Girls’ Grammar School. She gained a choral scholarship to St Edmund Hall, Oxford University to read Music. At Oxford, Nancy sang and toured regularly with Schola Cantorum and St Peters’ College Choir, travelling to Italy, Poland and Germany. She then went to the University of York with an academic scholarship to complete a Masters in Music and performance practise. Whilst at York she performed regularly as a soloist at the National Centre for early music, in the annual Early Music festival and with the Yorkshire Bach Choir.

Nancy was part of the inaugural year of The Sixteen’s training course, Genesis Sixteen, initiated to train the next generation of consort singers and culminating in a performance of the Messiah in the Barbican, alongside The Sixteen. As a singer in London, Nancy has given solo recitals at the Handel House Museum and St Martin-in-the-Fields. She has performed with such groups as The Sixteen, the Choir of the Enlightenment at the BBC proms, Vocal Futures, the Fieri Consort and the St Martins’ Voices.