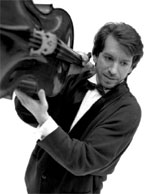 Following his Royal Festival Hall debut at the age of 12, Robert Cohen subsequently achieved international recognition whilst still a teenager with a recording of the Elgar Cello Concerto which earned a silver disc and placed him at the forefront of his musical generation. He has gone on to consolidate an impressive discography ranging from solo Bach (and the Schubert Quintet with the Amadeus on Deutsche Grammophon) to a recent release of the H K Gruber Cello Concerto under the direction of the composer.

The creative give-and-take of the concert hall remains Cohen’s first love however. As a busy performing artist his career takes him to the USA, Europe, Eastern Europe, Scandinavia, Australia, Japan and the UK. He has performed with such conductors as Claudio Abbado, Maris Jansons, Riccardo Muti and Sir Simon Rattle, and he retains a lively enthusiasm for chamber music (which provides the bedrock of the Charleston Manor Festival which he has directed since 1989).

Cohen’s passionate and articulate views on the art of learning, performing and communicating music have stimulated illuminating masterclasses, and have been widely broadcast and published. Since 1999 he has been a Visiting Professor at the Royal Academy of Music. Robert Cohen is also Professor of Advanced Cello at the Conservatorio della Svizzera Italiana in Lugano.

As soloist, conductor and teacher Robert Cohen’s music-making takes him all over the world; holding, as The Guardian observed, audiences ‘in the palm of his hand’.