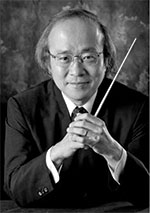 In recognition of his outstanding services to music in the UK, Tadaaki Otaka received an honorary CBE and is also holder of the Suntory Medal, the highest musical award in his native Japan. He studied conducting at the Toho Gakuen School of Music as well as in Vienna and was for twenty years Permanent Conductor of the Tokyo Philharmonic Orchestra. In 1987 he was made Music Director of BBC National Orchestra of Wales before becoming their Conductor Laureate in 1996, and has toured extensively in Europe, Japan and the USA. Musical Director of the Sapporo Symphony, he also founded Kioi Sinfonietta Tokyo in 1995 and has toured with both ensembles in Europe. His extensive guest conducting has included many visits to Australia, the Far East, Europe and North America, with the orchestras of such cities as Melbourne, Sydney, Hong Kong, Vancouver, Oregon, Lille, Strasbourg, Bamberg, Helsinki, Oslo, The Hague and Rotterdam. He has also conducted many UK orchestras including London Philharmonic, London Symphony, Bournemouth Symphony, City of Birmingham Symphony, Ulster Orchestra and the Orchestra of Opera North. In recent seasons he has made returns to London Philharmonic, London Symphony (with whom he performed Brahms’ Requiem in the City of London Festival), Bournemouth Symphony, Bergen Philharmonic, Singapore Symphony, Rotterdam Philharmonic, and BBC NOW. Plans for the current season and beyond include returns to City of Birmingham Symphony, Melbourne Symphony, West Australian Symphony and Bournemouth Symphony as well as his regular BBC NOW and Japanese commitments. His discography includes the complete Rachmaninov Symphonies and piano concertos, a Glazunov symphony cycle, Britten’s Peter Grimes and works by Takemitsu, Gubaidulina, Firsova and Denisov.