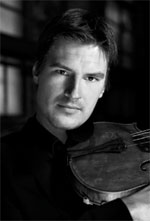 Estonian violinist and violist Andres Kaljuste enjoys a rich musical life both in his homeland and abroad. Hailed in the press as ‘a soloist with a great sense of character’, Kaljuste is an artist passionately dedicated to communication through music of diverse styles and genres.

After studies at ‘Lilla Akademien’, Stockholm with Nina Balabina and with Prof. Ulf Wallin at the Royal Academy of Music in Stockholm and Hochschule für Musik ‘Hanns Eisler’ Berlin, Kaljuste became a member of the Academy of Rundfunk-Sinfonieorchester Berlin. Before completing his studies in Germany, Andres worked at the ‘Lilla Akademien’, recognized as one of the top music schools in Scandinavia, as a teacher of violin and viola. He was also conductor of the school’s string orchestras and coach for a wide variety of ensembles. He now pursues a busy freelance career which has taken him to China, Japan and many European festivals within in the past year.

Kaljuste has appeared as a soloist with Estonian National Symphony Orchestra, Verona Philharmonic, Tallinn Chamber Orchestra, ‘Belgrade Strings’, Vanemuise Symhony Orchestra and he made his debut at Berlin’s Konzerthaus in 2010 with Cappella Academica, playing the Brahms violin concerto. Since 2007, Andres has been artist in residence at the Nargen Festival in his native Estonia, where his main emphasis lies in chamber music—the form of music-making he enjoys most. He frequently appears with pianist Sophia Rahman—a partnership that has taken them on tour for concerts and masterclasses in China, Russia and Estonia.

Kaljuste’s native music has found an ever-increasing place in his repertoire. Estonian composers Timo Steiner and Elo Masing have dedicated works to him and he has often worked together with Arvo Pärt, whose music he has premiered and recorded.