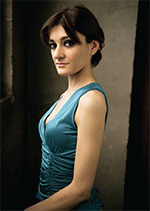 In 1993, Ms. Zavalloni began a collaboration with Louis Andriessen, who wrote several works for her: Passeggiata in tram in America e return; La Passione; Inanna; Letter from Cathy; and Racconto dall’ inferno, the recording of which resulted in her being awarded a Diapason d’Or in 2008. Andriessen also composed the role of Dante in La Commedia and the title role of Anaïs Nin for Cristina Zavalloni.

As a composer and a jazz bandleader, Ms. Zavalloni has conceived several programs. She is currently signed with Italian label EGEA, for which she recorded IDEA (2006) and Solidago (2009), which includes her own compositions and a selection of Charles Aznavour covers. Her new jazz album is expected to be published at the beginning of 2012.