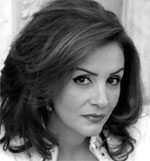 Soprano Rima Tawil is a graduate with diplomas in musicology, voice and piano. She studied as a pianist at the Ecole Normale de Musique de Paris, and as a singer at the Centro di Perfezionamento, Teatro alla Scala di Milano. The recipient of several prizes and awards, including the ‘Centro Artisti Lirici’ from La Scala de Milan, soprano Rima Tawil has sung on numerous European and American stages.

After Rima’s debut in Britten’s Noah’s Ark and Puccini’s Madama Butterfly at the Piccolo Teatro Studio-La Scala di Milano, she appeared as Liù in Puccini’s Turandot and Mimi in La Bohème in Belgium and in Holland. Rima was acclaimed by the critics as Micaela from Bizet’s Carmen, at the Wallonia Royal Opera. L’Opera wrote: ‘Rima Tawil, one of the best Micaelas ever heard.’ She also interpreted Salomé in Massenet’s Hérodiade, Elisetta in Il Matrimonio Segreto by Cimarosa, and Die Amazone in Das Teufels Lustshloss by Schubert. In Marseille competition, Rima’s performance as Marguerite in Gounod’s Faust brought the following praise in the Opera International: ‘in addition to her singing talent, the soprano Rima Tawil is a highly gifted actress.’ She also appeared as Girolama in Don Juan ou Miguel Manara by Henri Tomasi.

Internationally, Rima has given concerts in a number of cities, including Paris, Monte-Carlo, Milano, Rome, Parma, Munich, London and New York. In Lebanon, Rima has performed in the Al-Bustan Festival, with José Carreras in the Beiteddine Festival, and with Placido Domingo in the Baalbeck International Festival.