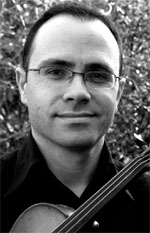 Born July 30, 1971 in Vichy (Allier), Jean-Philippe Kuzma studied violin and piano at the Conservatoire National de Région of Saint-Etienne. He graduated in 1988 with Gold Medals in Violin, Chamber Music, Sight reading and General Musicianship. He also received the 1989 First Prize at the Concours Général de Musique. While studying with the violinist Devy Erlih in 1991, he was admitted into the Conservatoire National Supérieur de Musique de Lyon, in the class of Elizabeth Balmer and Claire Bernard, leaving 1995 with a First Prize in Violin (Diplôme National d’Études Supérieures Musicales mention Très Bien à l’Unanimité). He received a scholarship from the Mécénat Musical Société Générale 1995-1996 season, and studied further at the Jean-Pierre Wallez Music Conservatory in Geneva.

From 1990 to 1996 he was First Violin for the Ensemble Orchestral Contemporain (Rhône-Alpes) directed by Daniel Kawka. Since then he has been violinist for the Orchestre Philharmonique de Radio France, conducted by Myung Whun Chung. He appears regularly both as a soloist and in chamber music, particularly within the Archets de Paris where he also plays the baroque violin.