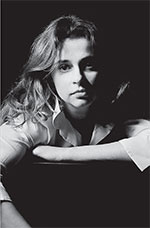 Sophia Lisovskaya was born in Moscow into a family of professional musicians and gave her first public performance at the age of six in Moscow’s Museum of Fine Art. Since then she has continued to follow the grand tradition of the old Russian School with a lineage of professors leading directly back to the great figures of Neuhaus, Sofronitzky and Scriabin. Regarding her debut album released on BIS, the American Record Guide said she was 'coming close to the standard set by Sofronitzky and Richter for these pieces' and said they were 'outstanding performances.'

At the age of 13 she won first prize in the All Soviet Competition ‘New Names’ performing Chopin’s Second Piano Concerto with the former Ministry of Culture Symphony Orchestra. She studied at the Tchaikovsky Junior Conservatoire of Music and in 1994 won a scholarship to the Royal Academy of Music in London. Following this she won a scholarship from the Philharmonia Orchestra (London) in 1996.

Her engagements in the UK in 2013 included a performance of Beethoven’s Emperor Concerto with the Royal Philharmonic Orchestra and she will return to China after a successful tour to give further concerts and appear on the major TV channels there.