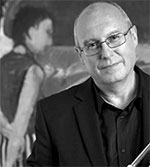 Graham Ashton is a tenured full Professor of Trumpet and Chair of Brass at Purchase College, State University of New York. As a soloist, he has appeared with numerous orchestras including the BBC Symphony, New York Virtuosi, Australian Chamber Orchestra, Orchestra of Our Time (New York), London Philharmonic, Irish Chamber Orchestra and FIRES-New York. During the past 25 years, Mr. Ashton has given over 200 master classes and recitals in 21 countries, and made eight acclaimed solo recordings for Virgin Classics, Nimbus, Signum Classics, Koch and Claves with the English Symphony, Irish Chamber and English Chamber Orchestras.

As a composer and arranger, Mr. Ashton has written music for film, theatre and the concert platform. Most recent commissions include the Australian Embassy (Washington DC), SONY Records and the US Army Westpoint Academy. His esoteric composition Birdsong, for didgeridoo, percussion, piano and brass, is recorded on Scenes of Spirits for Signum Classics. Mr. Ashton’s music is published exclusively by Editions BIM, Switzerland.

Mr. Ashton is a resident of New York and Director of the Granite Springs Music Society, a summer festival dedicated to promoting exceptional chamber music, together with outrageously delicious food and wines.