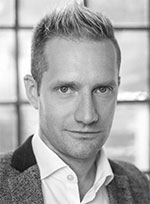 British tenor and animateur Charles MacDougall gained his Phd in Classics and Musicology at the University of London. He was a founder-member of VOCES8 and sang with them until 2012, performing over 100 concerts internationally each year. With the group, he released several successful commercial albums (including winning 2 CARA Awards) and made regular television and radio appearances, giving his final performance with them on Christmas Day 2012 in Shanghai. He has also sung for Cappella Nova, Schola Cantorum of Oxford and been involved in innovative collaborations with the James Taylor Quartet (Queen Elizabeth Hall).

Charles is also an experienced choral animateur, working for the London Symphony Orchestra, London Youth Choir, the Snape Maltings Friday Afternoons Project, is a Chorus Master for Gabrieli Roar and directs two choirs in London. Formerly the Senior Vocal Coach at Portsmouth Cathedral, Whitgift School and Croydon Minster, he is now the Choral Specialist for The Voices Foundation, coaches for the Royal School of Church Music, and is Consultant Vocal Coach at Derby Cathedral and Radley College.