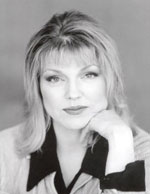 Janice Watson studied at the Guildhall School of Music and Drama and first came to prominence as winner of the Kathleen Ferrier memorial award.

In opera Miss Watson has sung Pamina with the Paris Opera; Vitellia for the Flanders Opera; Strauss’ Daphne and Arabella and Elettra (Idomeneo) at the Santa Fe Festival; Daphne, Arabella and Eva (Die Meistersinger von Nürnberg) with the San Francisco Opera; Pamina, Countess Almaviva and Arabella at the Bavarian State Opera; Ellen Orford at the Vienna State Opera, Netherlands Opera and the Royal Opera House, Covent Garden; Britten’s Gloriana under Richard Hickox at the Aldeburgh Festival; Countess Almaviva for the Deutsche Staatsoper, Berlin and in Tokyo, Micaela at both the Lyric Opera of Chicago and the Metropolitan Opera, and both Countess Almaviva and Liu at the Metropolitan Opera. She has been a regular guest with both English National Opera (most recently as the Marschallin) and Welsh National Opera (most recently as Strauss’ Ariadne).

Her many recordings include Orff's Carmina Burana, Poulenc's Gloria and Howells' Missa Sabrinensis under Rozhdestvensky. She recorded Ellen Orford under Richard Hickox (for which she received a Grammy Award) and with the London Symphony Orchestra and Sir Colin Davis; Helena in A Midsummer Night's Dream under Sir Colin Davis and the title role in Jenufa under Sir Charles Mackerras.