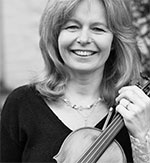 As one of the most respected violinists of her generation, Rosemary Furniss combines a career as soloist with that of Concertmaster, chamber musician and teacher.

A founder pupil of the Yehudi Menuhin School, Rosemary was a protégée of the late Lord Menuhin, with whom she had the privilege of performing as soloist. She went on to study with other eminent teachers including Fredrick Grinke in London and Ivan Galamian at The Curtis Institute in Philadelphia and participated in masterclasses with Sándor Végh and Pinchas Zuckerman.

Since then Rosemary’s career has taken her all over the world and she has been consistently acclaimed for her solo performances. These include collaborations with such renowned conductors as Simon Rattle, Yuri Simonov, David Atherton and Richard Hickox, and orchestras including the Philharmonia, Hallé, Singapore Symphony, Scottish Chamber and Royal Philharmonic.

Rosemary is a Professor at the Royal College of Music and assisted Lord Menuhin in the acclaimed documentary ‘Menuhin’s Children’. She was awarded a RAM fellowship and is also a Churchill Fellow.