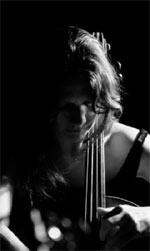 Caroline studied at the Royal Academy of Music in London (where she was an Associate from the age of 19) and later with the legendary Pierre Fournier in Geneva. At 13 she was a finalist in the first ever BBC Young Musician of the Year, and two years later she was the youngest ever recipient of the Isserlis Scholarship.

Caroline was a member of the Nigel Kennedy Quartet and the Balanescu Quartet, as well as a founder member of the Apollo Piano Trio. Prior to her appointment as Principal Cellist of the English Chamber Orchestra she was principal of the BT Scottish Ensemble and the LCO.

Caroline’s credits include the solo cello music for the films ‘Hilary and Jackie’ (about the life of Jacqueline du Pré), ‘Truly Madly Deeply’ and Dario Marianelli’s ‘Pride & Prejudice’ and his Oscar-winning score to ‘Atonement’.