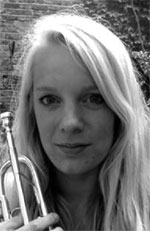 Rebecca Crawshaw is one of the most promising young professional trumpet players in the UK. Emerging from a brass band background she was principal in the National Youth Brass Band of Great Britain for 6 years, a soloist with the European Youth Brass Band and a finalist in BBC Young Brass Player of the Year. During her time at Cambridge Rebecca held a Music Exhibition Award from Jesus College and was principal trumpet in the CUMS I orchestra, The Cambridge Beethoven Ensemble and the award winning Shadwell Opera Company. She has worked with professional ensembles such as the London Sinfonietta and Opera North. She is also an accomplished Baroque Trumpet player and is involved in The Royal Academy of Music Bach Cantata series.

Rebecca was a former student of Murray Greig, and Jim Watson, and studied with Rod Franks and Mark David at the Royal Academy of Music before graduating with distinction.