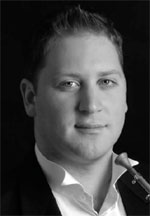 Martin Owen is widely regarded as one of Europe’s leading horn players, appearing as soloist and chamber musician at some of the leading music festivals around the world. He currently holds the positions of Principal Horn at the BBC Symphony Orchestra and is on a temporary contract as Solo Horn of the Berlin Philharmonic Orchestra, having served as Principal Horn of the Royal Philharmonic Orchestra for ten years.

Other recordings include Mozart’s horn concertos with the Royal Philharmonic Orchestra (for RPO Classics), Britten’s Serenade with Toby Spence and the Scottish Ensemble directed by Clio Gould (for Linn), Schubert’s Octet with Michael Collins (which was recorded for Wigmore Hall’s Live label), Schumann’s Konzertstück with the BBC Philharmonic Orchestra/Mackerras (on the BBC’s label), Danzi’s Sinfonia Concertante with the Orquestra de Cadaques/Marriner (on the Trito label) and Roderick Elms’ Four Seasonal Nocturnes with the Royal Philharmonic Orchestra/Cleobury (for Dutton). Additionally, Martin Owen has performed on over 300 movie soundtracks to date including James Bond, Star Wars, Harry Potter, Gladiator and Pirates of the Caribbean films.

Martin Owen is a Fellow of the Royal Academy of Music, where he is Professor of Horn.