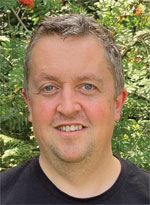 Welsh harpist Deian Rowlands studied at Wells Cathedral School and the Guildhall School of Music and Drama with Manon Morris, Bryn Lewis and Ann Griffiths, where he was awarded scholarships by the Countess of Munster Musical Trust, the Arts Council of Wales, Craxton Memorial Fund, The Leverhulme Trust, S4C, and the Open Instrumental Blue Ribbon at the 2002 National Eisteddfod of Wales.

Deian has established a career as a versatile harpist working in most genres of music. He has performed as a soloist and chamber musician all over the UK as well as in France, Italy, Spain, Germany, Austria, Switzerland and the USA. He made his Wigmore Hall debut in 2002 with Ravel’s Introduction and Allegro and has performed as soloist with the London Chamber Orchestra and BBC Concert Orchestra on BBC Radio 2 and at the BBC Proms. Early in his career, Deian was part of Live Music Now! where he performed at many of the UK’s music festivals and the BBC Proms. In 2006 he was invited by HRH the Prince of Wales to entertain the Royal Family on the occasion of the Queen’s 80th Birthday at Kew Palace.

He regularly performs with the country’s leading orchestras, including the Philharmonia, Royal Philharmonic and City of Birmingham Symphony Orchestras, with whom he has toured the majority of Europe, Asia, the Middle East, Central and North America. Deian has also held the harp seat for West End productions of South Pacific (Lincoln Centre production at the Barbican) and 42nd Street (Theatre Royal Drury Lane). In the recording studio, Deian has worked on many TV, film and commercial soundtracks, and was a featured artist on Joby Talbot’s Tide Harmonic (Signum). He has also featured on recordings with Renée Fleming (Decca) and Emma Johnson (Nimbus) as well as recording with artists including Sam Smith and Jazz trumpeter James Morrison.

An enthusiastic performer of new works, he has commissioned and premiered works by John Metcalf (Three Miniatures for flute and harp), Ben Ellin (Harp Concerto), Eric Crees (Three Sketches of Rackham) and Kieron Galliard (Ensueno Espagnol). In 2014, Deian was the harpist for Taliesin Arts Centre’s highly acclaimed production of Under Milk Wood – An Opera by John Metcalf. Deian also works as a composer and arranger and has written several library albums for Brilliant Music, Cues4U and West One Music Group.