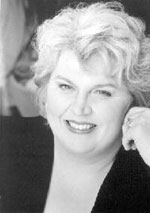 American soprano Christine Brewer was born in Illinois and began her professional career with Opera Theatre of Saint Louis, with whom she has performed Ellen Orford, Donna Anna and the title roles in Ariadne auf Naxos, Haydn's Armida and Britten’s Gloriana. In opera, Christine Brewer has sung Countess Almaviva (New York City Opera and the Royal Opera, Covent Garden), Donna Anna (Edinburgh Festival under Sir Charles Mackerras and in London, New York and Florida). She has sung Gluck's Iphigenie en Tauride in Madrid, Leonore in Fidelio at the Gulbenkian, Lisbon, Weber's Oberon with Richard Hickox in London and both Strauss’s Die Aegyptische Helena and Britten’s Peter Grimes in Santa Fe. She sang Isolde with the BBC Symphony Orchestra and Donald Runnicles and the Los Angeles Philharmonic and Salonen, Gloriana with Richard Hickox at the Aldeburgh Festival, and Chrysothemis (Elektra) with the Cleveland Orchestra and Frans Welser-Möst. She has achieved international renown for per performances of Strauss’s Ariadne auf Naxos having sung the role for English National Opera, Opera de Lyon (in Lyon and Paris), the Santa Fe Festival and most recently in her debut at the Metropolitan Opera under James Levine.