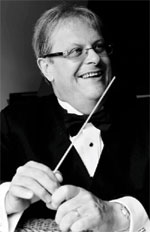 David Firman studied at Trinity College London, and Magdalene College Cambridge before going on to conduct the original West End productions of Jesus Christ Superstar, Evita, Cats, Chicago, Godspell, Pirates of Penzance, Singin’ in the Rain, Dancin’, Children of Eden, Metropolis, Andy Capp, Annie Get Your Gun, La Cage aux Folles, Carousel and Phantom of the Opera. He is now Principal Guest Conductor with the Danish Radio Sinfonietta, and as such has arranged and conducted upwards of 25 albums and a similar number of televised concerts. David also arranged, orchestrated and conducted a brand new score for The Hobbit, starring Christopher Lee, which opened the new Danish Concert Hall designed by French architect Jean Nouvel, and again in Copenhagen he recently conducted the world première of the musical Matador at Copenhagen’s new Opera House, where he also created the production’s fifty-minute underscore. David also composed and conducted a new score commissioned the Royal Danish Ballet, which was subsequently recorded for DVD and television transmission, and returned to the Royal Danish Opera act as Musical Director for their production of My Fair Lady.

David Firman has conducted many orchestras, including the London Symphony Orchestra, London Philharmonic Orchestra and BBC Concert Orchestra along with orchestras in Australia, Singapore, Bangkok, Beijing, Stockholm, Hannover Rouen, and Tokyo. David also has a long-standing partnership with the Royal Philharmonic Orchestra; they have given many performances at the Royal Albert Hall, along with summer concerts at the Hampton Court and the Henley Festivals. David’s association with the South Jutland Symphony Orchestra stretches couple of decades. Together they have garnered silver, gold and platinum CDs for sales in Scandinavia, and toured the region several times.