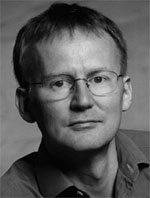 The product of many years of steady growth, the playing of Thomas Bowes is now fast gaining international recognition. Not a child prodigy, or an early developer, Bowes has spent many years developing an unusually deep and expressive musical personality.

In concerto repertoire Bowes has featured British composers. He has played the Elgar concerto in the USA and Germany as well as in the UK, most recently with the Hallé and Mark Elder. With the Britten concerto he made a dramatic German debut with the Bremen Philharmonic, stepping in at less than 24 hours notice for performances with Sian Edwards in 2003. Bowes also has a deep knowledge of that other glory of the English violin concerto, that by Walton. In 2004, he spent 3 weeks at the invitation of Lady Walton studying the work at the composer’s home on Ischia. He performed it in Oxford in 2005 in collaboration with the late Vernon Handley: “First up was Walton’s highly passionate Violin Concerto, handled with immense skill by Thomas Bowes…The result is an extraordinary fusion of the player and the music, in which Bowes seems to engage totally with the composer’s emotions and intentions…And all this was combined with Bowes’s own musicianship, technical mastery and tonal purity to produce a performance of rare quality.” (Oxford Times)

Bowes has excelled with the sensual and still little played Szymanowski concertos, making a specially recorded broadcast of No 2 for the 1998 BBC Proms season with the Ulster Orchestra and Takou Yuasa.

Bowes is an enthusiastic champion of contemporary music and made his debut with the BBC National Orchestra of Wales in the world premiere of John Metcalf’s concerto “Paradise Haunts…”. He has recorded the work for Signum Classics with the BBC NOW and Grant Llewellyn. In 2001 he premiered the concerto of Eleanor Alberga with the SCO and Joseph Swensen to a flourish of rave reviews. The work was an SCO commission.

Born in Hertfordshire and graduating from the masterclass of Bela Katona at Trinity College of Music in 1982, Bowes joined the London Philharmonic in 1985 and a year later the Academy of St Martin in the Fields. In 1987 he gave his London recital debut and between 1988 and1992 was the founding leader of the Maggini String Quartet. In 1989 he was invited to become the leader of the London Mozart Players, making a BBC Proms debut with them and Jane Glover in 1991. Still in demand as a guest leader, Bowes has led many of the UK’s finest orchestras—LSO, Philharmonia, RPO, London Sinfonietta, SCO, BBC Symphony Orchestra, CBSO, and in France, L’Orchestre National du Capitole de Toulouse. Bowes has also concert-mastered plenty of film scores, working closely with many eminent film composers.