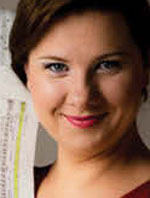 Polish soprano Magdalena Molendowska studied at the Guildhall School of Music & Drama under the guidance of Rudolf Piernay, where she was awarded the prestigious Gold Medal in her final year. She began her studies at the Academy of Music in Gdansk, as a student of Dariusz Paradowski. As well as this she obtained a Master of Law Diploma from Gdansk University. In 2008 she was a member of the Accademia Nazionale di Santa Cecilia‘s Opera Studio in Rome, where she worked with Renata Scotto.

Since 2011 she has been a soloist with the Polish National Opera in Warsaw, where she made her debut in Jakob Lenz by Wolfgang Rihm. In the 2012/13 season she returned to the Teatr Wielki Opera Narodowa to perform the title role in Halka by Stanisław Moniuszko. She has also sung with Wrocław Opera House, Glyndebourne Festival and Clonter Opera. For a number of years she performed with Gdansk Chamber Opera.

Her repertoire comprises contemporary music, songs of many nations, various cantata and oratorio works, however her most beloved music to perform is opera. She made her debut as a soloist in 2006 as Atalanta in Handel’s Serse, re di Persia. She has since then appeared in numerous roles, including Die Erste Dame (Die Zauberflöte), Donna Elvira (Don Giovanni), Countess (Le nozze di Figaro), Vitellia (La Clemenza di Tito), Anita (La Navarraise), Mrs Webbs in Ned Rorem’s Our Town, Kurfürstin in Carl Zeller’s Der Vogelhändler, Rosalinde (Die Fledermaus), and Mother in Hansel und Gretel.

She also appears frequently upon the dramatic stage. She participated in the work of the Academic Theatre Society, culminating in two premiere performances in Wybrzeze Theatre, Gdansk.