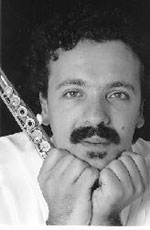 It is clear from his impressive curriculum that Marc Grauwels has never limited himself to one particular genre. Classical and modern, Chamber and minimalist music, jazz, Argentinian tango, concerted works and flute solos, or pieces for flute and guitar, harp or harpsichord are not onfy part of his repertoire but are also featured in the large number of records he has made. This artist has already appeared around the world in solo performances, in Chamber music with the harpist Susanna Mildonian, guitarist Guy Lukowski, and with the Warsaw Quartet. He has played as soloist with the Violons du Roy (Quebec), the Budapest Dall' Arco Orchestra, the Polisn Chamber Orchestra, the Orchestre de Chambre de Wallonie and numerous symphony orchestras. He has also been invited to appear at festivals in Germany, Belgium, Spain, France, Britain, Greece, Holland, Italy, Japan, Poland, Canada and the USA. He has been notably directed by Nino Rota and Astor Piazzolla, who composed a 'History of the Tango' for flute and guitar to be played by him and Guy Lukowski. He has played jazz in a trio with Claude Bölling. When a world orchestra was first constituted in 1986 under the direction of Carlo Maria Giulini, Marc Grauwels was selected as the principal flute. For several years he was principal flute in the orchestra of the Belgian National Opera, a position he presently holds with the Belgian Radio and Television Orchestra. He also teaches at the Brussels Royal Conservatory. His success as an artist is primarily due to brilliant technique combined with an exceptionally warm and powerful tone, but there is more to it than that. He is continually involved in looking for new shades of tone and subtle phrasing that bring him much closer to the stringed than to the traditional wind instruments. His flute is played to provide expression of his innermost self through his profound understanding of the music.