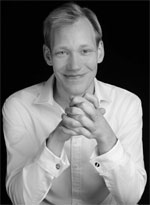 see also James Sherlock (piano)
James Sherlock performs widely as an organist, pianist and conductor. He was organ scholar at Trinity College Cambridge, and continued his keyboard and conducting studies at the Guildhall School of Music with Ronan O’Hora, Joan Havill and Pamela Lidiard.

He works regularly with major orchestras and choirs in the UK, appearing on several award-winning records with Tenebrae, alongside solo appearances with the London Philharmonic and English Chamber Orchestras. As a chamber musician he works with Dame Felicity Lott, Angelika Kirchschlager and Benjamin Appl, appearing at major chamber festivals including the Schubertiade Hohenems, Wigmore and Carnegie Halls.

Increasingly active as a conductor, James is a member of the International Artists Academy of the Berlin Philharmonic and London Symphony Orchestras. He is a winner of the Royal Overseas League Piano Competition and the ROSL award for accompanists, Das Lied International Song Competition, the BBC Performing Arts Trust, Award for Young Concert Artists and Gold Medallist at the Marcello Galanti International Organ Competition. He is a Fellow of the Guildhall School of Music & Drama, a Samling Artist and Director of Music at Hampstead Parish Church.