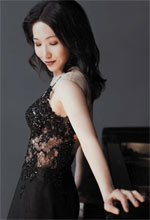 Born in Montréal, Canadian pianist Lucille Chung has been acclaimed for her ‘stylish and refined performances’ by Gramophone magazine, ‘combining vigour and suppleness with natural eloquence and elegance’ (Le Soir).

She made her debut at the age of ten with the Montréal Symphony Orchestra and Charles Dutoit subsequently invited her to be a featured soloist during the MSO Asian Tour in 1989. Since then, she has performed an extensive concerto repertoire with over 65 leading orchestras such as the Philadelphia Orchestra, Moscow Virtuosi, BBC National Orchestra of Wales, Flemish Radio Orchestra, Orquesta Sinfónica de Tenerífe, Orquesta Sinfónica de Bilbao, Staatskapelle Weimar, Philharmonie de Lorraine, Orchestra Sinfonica Siciliana, Belgrade Philharmonic, the Seoul Philharmonic, KBS Orchestra, New Jersey Symphony, Dallas Symphony, UNAM Philharmonic (Mexico), Israel Chamber Orchestra as well as all the major Canadian orchestras, including Montreal, Toronto, Vancouver, National Arts Centre (Ottawa), Calgary, Winnipeg and Metropolitain, among others. She has appeared with conductors such as Krzysztof Penderecki, Vladimir Spivakov, Vasily Petrenko, Yannick Nézet-Séguin, Peter Oundjian, Gerd Albrecht and Charles Dutoit.

She graduated from both the Curtis Institute of Music and the Juilliard School before she turned twenty. She decided to further her studies in London with Maria Curcio-Diamand, Schnabel’s protégée, at the ‘Mozarteum’ in Salzburg with Karl-Heinz Kämmerling and received the Konzertexam Diplom from the Hochschule ‘Franz Liszt’ in Weimar, where she worked with the late Lazar Berman. She also graduated from the Accademia Pianistica in Imola, Italy with the honorary title of ‘Master’ and from Southern Methodist University under Joaquín Achúcarro where she is now a Johnson-Prothro Artist-in-Residence. Ms. Chung is the recipient of the prestigious Honors Diploma at the Accademia Chigiana in Siena, Italy.

Lucille Chung has been hailed as ‘a considerable artist, admirable for her bold choice of music’ by The Sunday Times for her recordings of the complete piano works by György Ligeti on the Dynamic label. The first volume was released in 2001 to great critical acclaim, receiving the maximum R10 from Classica-Répertoire in France, 5 Stars from the BBC Music Magazine, and 5 Stars on Fono Forum in Germany. The final volume, which also contains works for two pianos, was recorded with her husband, Alessio Bax and once again received the prestigious R10 from Classica-Répertoire. Her all-Scriabin CD won the ‘Best Instrumental Recording’ prize at the 2003 Prelude Classical Awards in Holland as well as the coveted R10 from Classica-Répertoire in France. She also recorded the two Mendelssohn Piano Concerti on the Richelieu/Radio-Canada label, which was nominated for the Prix Opus in Canada. In August 2005, Bax and Chung recorded Saint-Saëns’ Carnival of the Animals with the Fort Worth Symphony under Maestro Miguel Harth-Bedoya, which was released in 2006. In 2007 she released a solo album for the Fazioli Concert Hall Series and recently, Lucille embarked on an exclusive contract with Disques XXI/Universal. So far, she has released two CDs, Piano Transcriptions of Camille Saint-Saëns and Mozart & Me. Both CDs continue earning critical praise and have been broadcast internationally. 2013 marked the release of a piano duo disc with Alessio Bax, presenting Stravinsky’s original four-hand version of the ballet Petrouchka as well as music by Brahms and Piazzolla for Signum Records.

Lucille is fluent in French, English, Korean, Italian, German, and Russian. She and husband, pianist Alessio Bax make their home in New York City with their daughter, Mila, and are artistic co-directors of the Dallas-based Joaquín Achúcarro Foundation. 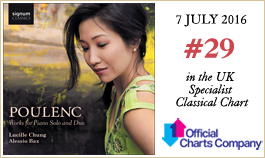