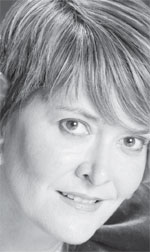 Australian Mezzo-soprano Catherine Carby studied at the Canberra School of Music and the Royal College of Music, London.

Other companies she has worked with include Buxton Festival Opera, English National Opera, the London Handel Festival, London’s Royal Opera and Scottish Opera.

Her recordings include The Love for Three Oranges for Chandos CD, Der Rosenkavalier for Opera Australia CD / DVD and Classic 100 Opera for ABC.