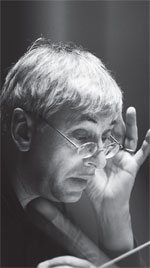 Maestro Venzago’s varied discography has earned him several major awards, including the Grand Prix du Disque, the Diapason d´or and the Edison Prize. The recordings of the operas Venus and Penthesilea and the whole choral oeuvre by Othmar Schoeck were highly acclaimed by the international critics and earned several prizes. So did his first feature film, My Brother the Conductor by Alberto Venzago which was released throughout Europe and on DVD. At present Mario Venzago together with the CPO label is working on a complete recording of all ten Bruckner symphonies for his project 'The other Bruckner', whose single releases were already highly acclaimed by the international critics.