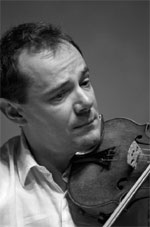 Philippe is a French-born violinist who has been a regular recitalist in both France and the UK. He has performed widely in broadcast recitals on French radio and television. He studied violin at the Paris Conservatoire with Pierre Doukan and was awarded the Premier Prix as both soloist and chamber musician. Winning several awards and grants, he continued his studies at the Royal Academy of Music with György Pauk. In 1992 he received the honour Lauréat of the Yehudi Menuhin Foundation of France and in 2001 was awarded Honorary Associateship by the Royal Academy of Music.

He took part in the Decca recording An Equal Music, containing the items mentioned in the Indian novelist Vikram Seth’s book of the same name, playing solo Bach and chamber music. Philippe plays chamber music, recitals and solo works, as well as leading orchestras and currently holds the position of Principal Second Violin in the Philharmonia. His instrument is an Italian violin made by Thomas Eberle in 1786.