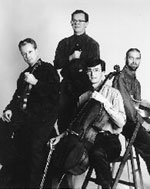 The Coull, one of Britain's leading string quartets well-known both in the UK and internationally, have been heard frequently on radio in Britain, Europe and the United States and their recent overseas tours have included concerts in Germany, Austria, Switzerland and America where they gave performances as far apart as San Francisco and Washington DC. At home in Britain they have played in the Cheltenham, Salisbury and Bournemouth Festivals and have been very much in demand at music clubs throughout the country. They have taken part in a number of P&O's 'Classical Musical Cruises' with Richard Baker.

For Hyperion the Coull have completed a 3-CD set of all the Mendelssohn Quartets.They continue to play a very active part in the musical life of the University of Warwick where they have been Quartet-in-Residence since 1977. They are frequently invited to coach chamber music players at leading musical institutions and summer schools.Future plans include further tours of Europe and the USA, and a London series of concerts which will include all of Mendelssohn's quartets, together with many of those by Beethoven.