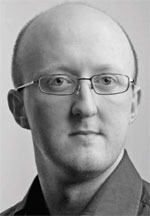 Born in Yorkshire in 1977, Matthew Schellhorn studied at Chetham’s School of Music in Manchester and at the University of Cambridge, where his teachers included David Hartigan, Ryszard Bakst, Maria Curcio and Peter Hill. He studied later in Paris with Yvonne Loriod-Messiaen.

Selected as a ‘Talent to Watch’ by BBC Music Magazine, and described as ‘one of Britain’s most exciting young pianists’ (Classic FM), Matthew has a growing international career, which in recent seasons has seen recitals in Europe, Ireland and North America.

He has given performances in many major venues throughout the UK, including Wigmore Hall, Purcell Room (Southbank Centre) and St Martin-in-the-Fields in London.

Matthew’s performances of the music of Olivier Messiaen have been met with superlative critical approval. His acclaimed solo recital at London’s Southbank Centre in 2006 confirmed his status as the pre-eminent Messiaen interpreter of his generation in Britain. Following his performances at the age of twenty of Vingt Regards sur l’Enfant-Jésus in Cambridge, he was invited in 2002 to perform at the Messiaen International Conference, where Christopher Dingle of BBC Music Magazine described one solo recital as ‘a cherished memory for those privileged enough to experience it’.

During the 2008 Messiaen centenary, Matthew is involved in numerous performances of Messiaen’s music. In the UK, he has been guest soloist in performances of Trois petites Liturgies de la Présence Divine and Turangalîla-Symphonie. He will also take part in the ‘Festival Messiaen au Pays de la Meije’ in France.

Other highlights of the 2008/09 season include appearances at the Hampstead and Highgate and the Three Choirs festivals, recitals around the UK and Ireland, and performances with the London Mozart Players.

‘An excellent pianist and an excellent exponent. … Accuracy, rhythm, sonority, technique, emotion … everything is played as Messiaen wished it.’ (Yvonne Loriod-Messiaen)