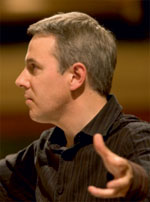 One of the most sought after conductors of his generation, Richard Farnes has been Music Director of Opera North since 2004, conducting many highly-praised opera productions there, including Otello, La traviata, Falstaff, Peter Grimes, The Turn of the Screw, The Marriage of Figaro, La Bohème, and Eugene Onegin, as well as premieres of David Sawer’s Skin Deep and Simon Holt’s The Nightingale’s to Blame. In 2011, they began an ambitious project to perform Wagner’s Ring in concert, culminating in performances of the complete cycle in 2015. Richard has a close association with Scottish Opera, and has conducted for Glyndebourne, the Royal Opera House, Covent Garden (London), English National Opera, New Israeli Opera, English Touring Opera, and European Chamber Opera, as well as the BBC Philharmonic, Royal Scottish National Orchestra, and the Scottish Chamber Orchestra.

Richard read Music at King’s College, Cambridge, where he was an organ scholar, before studying at the National Opera Studio, Royal Academy of Music (winning two prestigious conducting scholarships), and Guildhall School of Music and Drama, where he conducted the first British production of Rossini’s Journey to Reims. His recordings include Duke Bluebeard’s Castle and Don Carlos for Chandos Records.