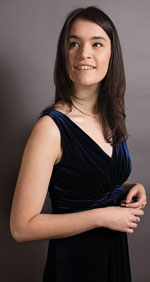 Helen Charlston began singing in the St Albans Abbey Girls Choir. She then studied music at Trinity College, Cambridge, where she was a choral scholar for four years and held a scholarship on the Pembroke College Lieder Scheme, led by pianist Joseph Middleton. Hailed ‘a rather special mezzo’ by MusicWeb International, Helen is a Rising Star of the Orchestra of the Age of Enlightenment for 2017-2019.

Helen has appeared as a soloist throughout Europe, Australia and America and is often heard in concert across the UK. Highlights include Helen’s debut at Wigmore Hall singing Telemann’s Ihr Völker hört with Florilegium (also broadcast on BBC Radio 3), Bach’s St Matthew Passion at the Thomaskirche in Leipzig with the Gabrieli Consort and Players under Paul McCreesh, a worldwide tour of Handel’s Messiah, Schoenberg’s Lied der Waldtaube at Cadogan Hall, Duruflé’s Requiem with the City of London Sinfonia and Bach’s B minor Mass with Vox Luminis.

She has appeared at festivals across the UK and Europe, including the Three Choirs, Aix-en-Provence, Roman River and Keble Early Music festivals, and the London Festival of Baroque Music. Operatic roles include Olga in Eugene Onegin, Florence Pike in Albert Herring, Sara in Jonathan Dove’s Tobias and the Angel and Dinah in Bernstein’s Trouble in Tahiti. Helen created the role of Dido in young composer Rhiannon Randle’s Dido is Dead, a chamber opera based on Virgil’s writings. Most recently, she has sung Messaggera and Proserpina in Monteverdi’s L’Orfeo for the Brighton Early Music Festival.