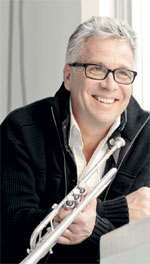 Håkan Hardenberger is one of the world’s leading soloists, consistently recognized for his phenomenal performances and tireless innovation. Alongside his performances of the classical repertory, he is also renowned as a pioneer of significant and virtuosic new trumpet works. He performs with the world’s leading orchestras, including the London, Boston and Chicago Symphonies, New York Philharmonic, Berlin and Vienna Philharmonic Orchestras, Royal Concertgebouw Orchestra, Radio France Philharmonic Orchestra, Bavarian Radio Symphony, all the major Nordic orchestras and the NHK Symphony Orchestra. Conductors with whom he collaborates regularly include Alan Gilbert, Daniel Harding, Ingo Metzmacher, Andris Nelsons, Sakari Oramo, Jukka-Pekka Saraste and John Storgårds.

Håkan Hardenberger was born in Malmö. He began studying the trumpet at the age of eight with Bo Nilsson and continued his studies at the Paris Conservatoire with Pierre Thibaud and in Los Angeles with Thomas Stevens. He is a professor at the Malmö Conservatoire and Artistic Director of the Malmö Chamber Music festival.