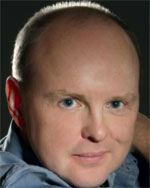 Barry Banks’ outstanding facility in roles by Bellini, Donizetti and Rossini has brought him to the attention of the world’s leading opera houses, including the Teatro alla Scala, Royal Opera House, Covent Garden, Metropolitan Opera, the Bayerische Staatsoper, and English National Opera, where he has partnered Renée Fleming, Natalie Dessay, and Anna Netrebko in operas such as La fille du régiment, La sonnambula, L’elisir d’amore and Rossini’s Armida. Other notable roles include Tamino (The Magic Flute), Tom Rakewell (The Rake’s Progress), the title role in The Tales of Hoffmann, and Count Almaviva (The Barber of Seville).

On stage, Barry Banks has performed, among other great works, Britten’s War Requiem, Elgar’s The Dream of Gerontius, Rossini’s Petite Messe Solennelle, and Berlioz’s Grande Messe des morts, with orchestras including the London Symphony Orchestra, the Royal Philharmonic Orchestra, the Münchner Philharmoniker under Sir Andrew Davis, and the Orchestre Philharmonique de Strasbourg. He has also appeared at the Edinburgh International Festival.

Barry Banks’ discography includes numerous discs in the ‘Opera in English’ series and a solo recital disc for Chandos, as well as many other DVD and CD releases on Virgin/EMI, Teldec, and Telarc.