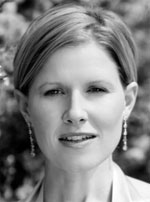 Sally Matthews was the winner of the 1999 Kathleen Ferrier Award. She studied with Cynthia Jolly and Johanna Peters and completed the Opera Course at the Guildhall School of Music and Drama in 2000. She was a member of The Royal Opera, Covent Garden Young Artist Programme from 2001 to 2003 and was part of the BBC New Generation Artists. She currently studies with Paul Farringdon.

In 2001 she made her Royal Opera debut as Nannetta in Falstaff with Bernard Haitink. Since then, roles at Covent Garden have included Pamina in Die Zauberflöte; Fiordiligi in Così fan tutte; Blanche in Les Dialogues de Carmélites; Sifare in Mitridate and Anne Truelove in The Rake’s Progress.

As a recitalist, Sally has appeared with pianist Simon Lepper at the Concergebouw Hall, Amsterdam, La Monnaie, Brussels and regular appearances at Wigmore Hall, London have included performances with The Nash Ensemble, as well as solo recitals.