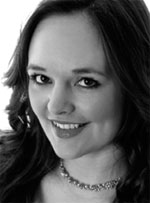 Lucy Hall is a scholar on the Opera course at the Guildhall School of Music and Drama under the tutelage of Susan McCulloch. She previously achieved a first class honours degree in Music from the Guildhall, winning both the Dove Memorial Prize for being the highest marked graduate of 2010 and also the Ann Wyburd Prize for best lieder.

Lucy enjoys a varied career and has performed across the UK in venues such as The Royal Albert Hall and Barbican Centre, with orchestras including the Royal Philharmonic Orchestra and BBC Concert Orchestra. Performance highlights include the role of Barbarina (Le Nozze di Figaro) for the British Youth Opera, the world premiere of Edward Rushton’s Cicadas with members of the LSO, and Handel’s Messiah.

Lucy has been awarded the Southwell Choral Society Bursary, the Peggy Oldham Award and an Ian Fleming Charitable Trust Award. She has also won the Best Song Prize in the National Mozart Singing Competition, a Countess of Munster award, a Sybil Tutton award, and the highest prize at the Simon Fletcher Charitable Trust awards.