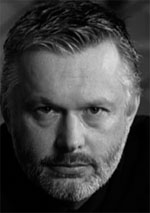 Ian Storey was born and raised in County Durham. He obtained a degree in Furniture Design at Loughborough University, before taking up a teaching position in New Zealand, where he began to study singing with Anthea Moller, later continuing his studies in London and Italy.

His opera career began in 1991 with the role of Male Chorus in The Rape of Lucretia followed by Rodolfo (La bohème) and Radames (Aida), all with Opera East. In 1993, with sponsorship from The Royal Opera, Covent Garden and The Peter Moores Foundation, he studied at the National Opera Studio in London. Walter Scott & Partners funded further study in Italy.

Ian has sung a wide variety of roles, including Cavaradossi (Tosca), Manrico (Il trovatore), Pinkerton (Madame Butterfly), the title role in Otello, and Tristan (Tristan und Isolde), and has worked for many companies including, among others, Welsh National Opera, Royal Opera, Covent Garden, Glyndebourne Festival Opera, La Scala, and the Staatsoper and Deutsche Oper in Berlin and Zurich. Concert appearances include Věc Makropulos at the Concertgebouw (Amsterdam), Verdi Requiem in Durham Cathedral and in Newcastle, Das Lied von der Erde in Bologna, and Beethoven’s Ninth Symphony in Bologna and Rome. Ian has recorded Nozze istriane, Jenůfa and Lulu on CD, and broadcast recordings for BBC Radio 3 include The Olympians by Bliss, Elgar’s The Spanish Lady and Benjamin’s A Tale of Two Cities.