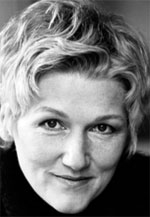 For the Salzburg Festival she has sung Katya Kabanová, Die tote Stadt, Wozzeck and Fidelio, and her debut at La Scala (Milan) in The Makropulos Affair was highly acclaimed. At the Royal Opera House, Covent Garden, she has sung The Gambler, Salome and Parsifal.

Angela has recorded extensively with such conductors as Daniel Barenboim, Ingo Metzmacher, and Sir Simon Rattle, and her jazz and song programme ‘From Babelsberg to Beverly Hills’, devoted to the era of Marlene Dietrich and Zarah Leander, has toured to the Kurt Weill Festival in Dessau, and to Munich, Madrid, Barcelona, Oviedo and La Scala (Milan).

She was voted Singer of the Year by Opernwelt in 1999, and in 2007 she received the Deutsche Theaterpreis ‘Der Faust’ for her portrayal of Salome at the Bayerische Staatsoper. In February 2009 the Austrian Government awarded her the title of ‘Kammersängerin’ of the Wiener Staatsoper.