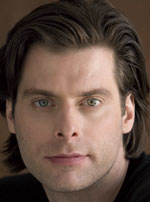 John Relyea has appeared in many of the world’s most celebrated opera houses including the Metropolitan Opera, San Francisco Opera (where he is an alumnus of the Merola Opera Program and a former Adler Fellow), Seattle Opera, Royal Opera House, Covent Garden, Paris Opera, Munich State Opera, and the Vienna State Opera. His many roles include Escamillo, Don Basilio, and the title role in Duke Bluebeard’s Castle.

On the concert platform he has appeared with major international orchestras with eminent conductors including Pierre Boulez, Sir Colin Davis, and Christoph Eschenbach, amongst others, and has also appeared at many festivals including Tanglewood. His discography includes the recording of Mahler’s Symphony No 8 with Sir Simon Rattle and the City of Birmingham Symphony Orchestra (EMI). He appears on the Metropolitan Opera’s Deutsche Grammophon DVDs of Don Giovanni and Die Meistersinger von Nürnberg.

John Relyea was the winner of the 2003 Richard Tucker Award.