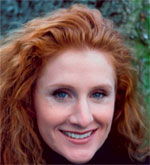 Texan Laura Claycomb trained at the San Francisco Opera Center, where she was an Adler Fellow from 1991 to 1994. Her repertoire ranges from baroque to contemporary and her signature roles have taken her to the world’s major opera houses, including Grand Théâtre de Genève, La Scala (Milan), Paris Opera, Los Angeles Opera, and San Francisco Opera. Highlights include Giulietta (I Capuleti e I Montecchi), Gilda (Rigoletto), Lucia (Lucia di Lammermoor) and Cleopatra (Giulio Cesare).

She has performed at many concert venues throughout Europe and the USA with first-class orchestras and conductors, most notably with Esa-Pekka Salonen and the Los Angeles Philharmonic, at Carnegie Hall with Ensemble Sospeso, with the LSO, and numerous concerts with Emmanuelle Haïm in France. She has also appeared at several festivals including Blossom, Aldeburgh and the BBC Proms.

Laura Claycomb’s recordings include Offenbach arias and Pacini’s Alessandro nell’Indie for Opera Rara. She has also recorded the role of Teresa in Berlioz’s Benvenuto Cellini, with the LSO under Sir Colin Davis, for LSO Live.