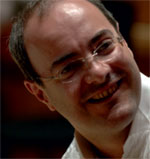 Gordan Nikolitch was born in 1968 and began studying the violin at the age of seven. He studied with the violinist and conductor Jean-Jacques Kantorow, at the Basle Music Academy, obtaining his teaching diploma in 1987 and his diploma in solo violin studies in 1990.

He is the recipient of many international prizes and has performed as soloist with the Orchestra of the Suisse Romande, the Basle Radio Symphony Orchestra, the Combattimento Consort, Amsterdam and the Rotterdam Philharmonic. He is also a distinguished chamber musician, having appeared with many renowned ensembles, as well as with his own Vellinger Quartet. In February 2005 Gordan performed as soloist with the LSO at the Barbican in the Brahms Violin Concerto.

Gordan has recorded for the Olympia, Cyrius, Harmonia Mundi, Pentaton and LSO Live labels, and plays a violin by Giuseppe Guarneri filius Andreae.