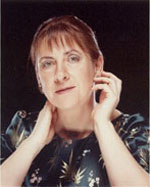 Born in England of Ukranian/Irish descent Lisa Beznosiuk is one of the worlds leading performers on early flutes. In her dual capacities as soloist and orchestral principal, she has travelled throughout Europe, Asia and North and South America, playing a wide range of 18th- and 19th-century repertoire with some of its finest interpreters.

She trained at the Guildhall School of Music in London where she developed a great interest and love for the wooden flute and it’s music, studying with Stephen Preston and also found herself busy playing harpsichord continuo.

The considerable enthusiastic critiques Lisa receives for her live and recorded performances regularly cite her 'real musical intelligence' (Goldberg) and beauty of tone in particular ('warmest, woodiest and most alluring of them all' BBC Music Magazine).

Her recordings include the complete Handel Flute Sonatas for Hyperion ('laser-accurate articulation and her blissfully precise intonation' Early Music Today), Vivaldi’s Op 10 Concerti for DG which was chosen as the preferred choice on Radio 3’s Building a Library, Mozart’s Flute Concertos (Decca), several versions of Bach’ Suite in B minor and his Fifth Brandenburg Concerto.

Most significantly, her 2002 release of the complete Bach Flute Sonatas also for Hyperion was hailed as the 'prime recommendation' for the works and as 'an outstanding achievement', demonstrating an 'expressive and technical virtuosity of the highest order' by BBC Music Magazine. The Independent described this recording as 'a perfect example of Beznosiuk’s dark, sweet tone and understated musicianship' and it recently received another 5 star recommendation from Goldberg Magazine.

Concerto appearances with the Orchestra of the Age of Enlightenment have prompted press comment praising her 'absolutely scintillating performance' with 'pearly tone and breathtaking virtuosity' (The Times). Her playing in the OAE at Glyndebourne Opera was labelled a 'truly magic flute'.

As a valued principal player over many years in some of Englands best period instrument orchestras (Orchestra of the Age of Enlightenment, English Concert, English Baroque Soloists, Academy of Ancient Music, London Classical Players) she also features prominently on many discs of orchestral music from Bach to Brahms.

Lisa enjoys teaching and is professor of early flutes at London’s Royal Academy of Music and the Royal Northern College of Music in Manchester. She holds an international reputation as a teacher and coach, and many of her former students are now successful and well-known flautists.

She lives in London with husband Richard Tunnicliffe and their daughter Luba.