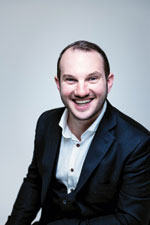 Marcus Farnsworth was awarded first prize in the 2009 Wigmore Hall International Song Competition and the Song Prize at the 2011 Kathleen Ferrier Competition. He began his musical training as a chorister at Southwell Minster and then at Chetham’s School of Music in Manchester. He read music at the University of Manchester, graduating with a first class honours degree, then studied singing at the Royal Academy of Music (where he is now an Associate). He is the Founder and Artistic Director of the Southwell Music Festival, and President of the St George’s Singers.

Recent highlights include two appearances with the BBC Symphony Orchestra: Vaughan Williams’s A Sea Symphony with Martyn Brabbins, and John Adams’s The Wound Dresser. Marcus made appearances as Strephon in Gilbert and Sullivan’s Iolanthe for a new production by Cal McCrystal at the ENO, in a staged performance of Messiah with The English Concert, and in Purcell’s King Arthur on tour with the Gabrieli Consort. He recently made his debut at the Teatro Real, Madrid in Kurt Weill’s Street Scene.

In opera, Marcus’s diverse roles have included Demetrius in Britten’s A Midsummer Night’s Dream on tour with the Aix-en-Provence Festival; Eddy in Turnage’s Greek with Boston Lyric Opera; Lance Corporal Lewis in the premiere of Ian Bell’s In Parenthesis for Welsh National Opera; and concert performances of Doctor Atomic conducted by John Adams, Britten’s Albert Herring with the BBC Symphony Orchestra, and Peter Grimes at the Bergen and Edinburgh Festivals with Edward Gardner.