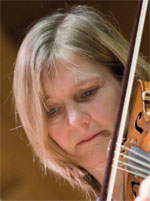 Caroline Balding has been described as a violinist of ‘poetic intensity’ (Music and Musicians), ‘rapt beauty’ and ‘virtuosic distinction’ (Gramophone), and ‘a formidable soloist combining beauty of sound with infallible articulation’ (La Nacion, Buenos Aires). As the violinist with the chamber ensembles Lontano and Gemini, amongst others, she has given recitals throughout the world and gave the Taiwanese premiere of Messiaen’s Quartet for the end of time.

As a period violinist she has appeared as guest leader with The English Concert, Florilegium, The Army of Generals, and The Hanover Band, in addition to being principal violin of The Band of Instruments and the Martlet Ensemble in her home town of Oxford. Often to be heard on BBC Radio 3 and numerous other European radio stations, she also participated in the series ‘Women in Music’ for Channel 4 television, and in a series about Beethoven for the BBC (dressed as a man).

She has had the privilege of taking part in a great many premiere performances and of working with the foremost composers of our day. Her extensive discography ranges from seventeenth-century Italian violin sonatas to numerous contemporary works, via such things as an alternative ‘Four Seasons’ by Antonio Guido (Divine Art) and the first recordings of early twentieth-century piano trios for the British Music Society. She enjoys associations with King’s College, London, and the universities of Oxford, Southampton and Surrey, and has worked with students all over Britain, including at the Royal Academy of Music and the Royal College of Music, and abroad at the Paris Conservatoire, in Italy, Taiwan, Argentina, Macedonia, and MIT in the United States.