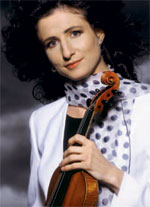 Madeleine Mitchell ‘is one of Britain’s liveliest musical forces and foremost violinists’ (The Times). She has performed a wide repertoire as a soloist in major venues in over forty countries and frequently broadcasts for television and radio including the BBC Proms, ABC (Australia), Bayerisher Rundfunk and for Italian TV when she won the Palmo d’Oro competition in Liguria. She has performed concertos with major orchestras including the St Petersburg Philharmonic, Czech and Polish Radio Symphony, Wurttemberg and Munich Chamber, the Royal Philharmonic and other London orchestras, Orchestra de Bahia Brazil and for the BBC. She commissioned a ‘concerto’ for solo violin with choir, with three works by Jonathan Harvey, Thierry Pecou and Roxanna Panufnik which she premiered at Bath and Spitalfields festivals and performed Lou Harrison’s Violin Concerto with Percussion Orchestra in Symphony Hal’s International Series.

Mitchell is well-known as a recitalist. The Herald described her as ‘a violinist in a million’ after a recital in Glasgow. She represented Britain in both the UKinNY Festival, with a recital at Lincoln Center, and in Rome for the Queen’s Jubilee.

She has given recitals at Sydney Opera House, Seoul Center for the Arts, frequently in the USA, in London and many international festivals. Madeleine Mitchell won the Great Britain Sasakawa Foundation award for her recitals with pianist Noriko Ogawa and she has collaborated with many outstanding artists.

Mitchell’s acclaimed discography includes albums shortlisted for GRAMMY and BBC Music Awards of works written for her by several of the UK’s best known composers: In Sunlight: Pieces for Madeleine Mitchell (including James MacMillan’s Kiss on Wood and A Different World) and FiddleSticks – her collaboration with percussionists Ensemble Bash, supported by Arts Council England, as well as two albums for Naxos of music by Alwyn and Howard Blake, Violin Songs – selected as Classic FM’s CD of the week, British Treasures – early 20th century romantic violin sonatas, Hummel violin sonatas and the widely recommended Messiaen: Quartet for the End of Time with Joanna MacGregor.

A highly creative personality, she devised the Red Violin Festival under Lord Menuhin’s patronage, the first international eclectic celebration of the fiddle across the arts for which she was shortlisted for both European Women of Achievement and Creative Briton Awards. She is also Director of the London Chamber Ensemble. Mitchell was awarded the Tagore Gold Medal as Foundation Scholar at the Royal College of Music where she is now a professor part-time. As a Fulbright/ITT Fellow she gained a master’s degree in New York studying with DeLay, Weilerstein and Rosenberg at the Eastman and Juilliard schools. She gives master classes worldwide and is on the faculty of the Orfeo International summer Music Festival in the Italian Alps.